The great eighteenth-century British economist Adam Smith (1723–90) is celebrated as the founder of modern economics. Yet Smith saw himself primarily as a philosopher rather than an economist and would never have predicted that the ideas for which he is now best known were his most important. This biography shows the extent to which Smith’s great works, The Wealth of Nations and The Theory of Moral Sentiments, were part of one of the most ambitious projects of the Euruopean Enlightenment, a grand “Science of Man” that would encompass law, history, and aesthetics as well as economics and ethics, and which was only half complete on Smith’s death in 1790.

Nick Phillipson reconstructs Smith’s intellectual ancestry and shows what Smith took from, and what he gave to, in the rapidly changing intellectual and commercial cultures of Glasgow and Edinburgh as they entered the great years of the Scottish Enlightenment. Above all he explains how far Smith’s ideas developed in dialogue with those of his closest friend, the other titan of the age, David Hume.

Named a Critics’ Favorite Book of 2010—The New Yorker

“In a feast of both writing and erudition, Nicholas Phillipson has recreated the intellectual and mercantile world of Adam Smith, and shows how it shaped Smith’s two masterpieces, the Theory of Moral Sentiments and the Wealth of Nations. He sets Smith’s economics firmly in the philosophy of the Scottish Enlightenment – and especially of his great friend David Hume – and argues compellingly that for Smith material improvement was not an end in itself, but a necessary condition for human ennoblement, which was the grand aim of his life’s work.  A wonderful, thought-provoking book.”—Robert Skidelsky, biographer of John Maynard Keynes

“Nicholas Phillipson’s lifelong study of Adam Smith has been well worth waiting for. Phillipson treats Smith’s The Wealth of Nations as the sequel to his Theory of Moral Sentiments. Political economy and the history of society were handmaids to the moral philosophy which Enlightenment thinkers intended as the replacement of religion. This story has never been better told than in this deeply sympathetic biography of an intellectually ambitious but personally modest man, and it is a superb portrait of the Scotland, Britain and Europe he lived in.”— J.G.A. Pocock,  Johns Hopkins University

“This stylish biography brings to life Adam Smith’s breathtaking ambition to create a Science of Man. Phillipson’s elegant prose and erudition make clear the necessary relationship between Smith’s moral philosophy and his political economy. The reader is left with a deeper appreciation for Smith’s project and for the eighteenth-century Scottish world in which he lived. This book is both a delight to read and agenda-setting. A real achievement!”—Steve Pincus, Yale University

“This is easily the best book on Smith I’ve read: a wonderfully accessible, thoroughly researched, full-bodied drama examining the philosopher and economist.  Phillipson’s biography presents Smith as a living personality, not just an imposing intellect, tracking his social, economic, and political moves from his birthplace Kirkcaldy, to Glasgow and Oxford, through his various lectures and professorships, travels around Europe, preparation of The Wealth of Nations, and finally to his work for the government.  In doing so, it makes a strong case for the importance and complexity – perhaps primacy – of the Scottish Enlightenment and the men who contributed to it.  In clean and clear prose, Phillipson explains what Smith was writing and why he was writing it, whether moral philosophy, jurisprudence, rhetoric or political economy.  This beguiling blend of Smith’s intellection and experience should appeal to anyone interested in the making of the modern world.”—David Hancock, author of Oceans of Wine: Madeira and the Emergence of American Trade and Taste

Adam Smith is celebrated all over the world as the author of The Wealth of Nations and the founder of modern economics. This book shows the extent to which The Wealth of Nations and Smith’s other great work, The Theory of Moral Sentiments, were part of a larger scheme to establish a grand “Science of Man,” one of the most ambitious projects of the European Enlightenment, which was to encompass law, history, and aesthetics as well as economics and ethics, and which was only half complete on Smith’s death in 1790.

Be the first to review “Adam Smith: An Enlightened Life (The Lewis Walpole Series in Eighteenth-Century Culture and History)” Cancel reply 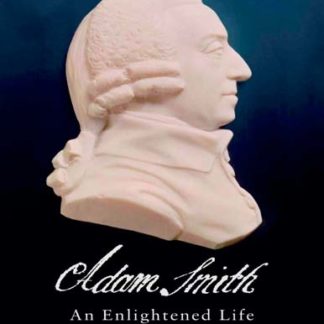 You're viewing: Adam Smith: An Enlightened Life (The Lewis Walpole Series in Eighteenth-Century Culture and History) $11.50
Add to cart