Engineering Design with SOLIDWORKS 2018 and video instruction is written to assist students, designers, engineers and professionals. The book provides a solid foundation in SOLIDWORKS by utilizing projects with step-by-step instructions for the beginner to intermediate SOLIDWORKS user. Explore the user interface, CommandManager, menus, toolbars and modeling techniques to create parts, assemblies and drawings in an engineering environment.

Follow the step-by-step instructions and develop multiple parts and assemblies that combine machined, plastic and sheet metal components. Formulate the skills to create, modify and edit sketches and solid features.

Desired outcomes and usage competencies are listed for each project. Know your objective up front. Follow the steps in Projects 1 – 9 to achieve the design goals.

Review Project 10 on Additive Manufacturing (3D printing) and its benefits and features. Understand the terms and technology used in low cost 3D printers.

Work between multiple documents, features, commands and custom properties that represent how engineers and designers utilize SOLIDWORKS in industry.

Review individual features, commands and tools with the video instruction. The projects contain exercises. The exercises analyze and examine usage competencies. Collaborate with leading industry suppliers such as SMC Corporation of America, Boston Gear and 80/20 Inc.

Collaborative information translates into numerous formats such as paper drawings, electronic files, rendered images and animations. On-line intelligent catalogs guide designers to the product that meets both their geometric requirements and performance functionality.

The author developed the industry scenarios by combining his own industry experience with the knowledge of engineers, department managers, vendors and manufacturers. He is directly involved with SOLIDWORKS every day. His responsibilities go far beyond the creation of just a 3D model.

The book is designed to complement the SOLIDWORKS Tutorials contained in SOLIDWORKS 2018.

A new bonus chapter on the CSWA – Mechanical Design exam has been added to the book. Chapter 10 on additive manufacturing was updated with new vendor and technology changes. There is also twenty percent additional homework examples for the instructors with support materials.

View the provided videos in the book to enhance the user experience. The videos cover the following topics:

David Planchard is the author of the following books: 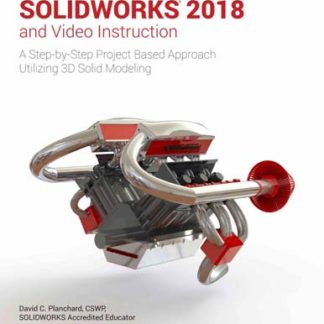 You're viewing: Engineering Design with SOLIDWORKS 2018 and Video Instruction $19.69
Add to cart