Computer Networks: A Systems Approach, Fifth Edition, explores the key principles of computer networking, with examples drawn from the real world of network and protocol design. Using the Internet as the primary example, this best selling and classic textbook explains various protocols and networking technologies. The systems oriented approach encourages students to think about how individual network components fit into a larger, complex system of interactions.

This book has a completely updated content with expanded coverage of the topics of utmost importance to networking professionals and students, including P2P, wireless, network security, and network applications such as e mail and the Web, IP telephony and video streaming, and peer to peer file sharing. There is now increased focus on application layer issues where innovative and exciting research and design is currently the center of attention. Other topics include network design and architecture; the ways users can connect to a network; the concepts of switching, routing, and internetworking; end to end protocols; congestion control and resource allocation; and end to end data.

Each chapter includes a problem statement, which introduces issues to be examined; shaded sidebars that elaborate on a topic or introduce a related advanced topic; What’s Next? discussions that deal with emerging issues in research, the commercial world, or society; and exercises.

This book is written for graduate or upper division undergraduate classes in computer networking. It will also be useful for industry professionals retraining for network related assignments, as well as for network practitioners seeking to understand the workings of network protocols and the big picture of networking.

“I have known and used this book for years and I always found it very valuable as a textbook for teaching computer networks as well as a reference book for networking professionals. This Fifth Edition maintains the core value of former editions and brings the clarity of explanation of network protocols in the introduction of the most up-to-date techniques, technologies and requirements of networking. Beyond describing the details of past and current networks, this book successfully motivates the curiosity, and hopefully new research, for the networks of the future.” —Stefano Basagni, Northeastern University

“Peterson and Davie have written an outstanding book for the computer networking world. It is a well-organized book that features a very helpful “big picture” systems approach. This book is a must have!” —Yonshik Choi, Illinois Institute of Technology

“The Fifth Edition of Computer Networks: A Systems Approach is well-suited for the serious student of computer networks, though it remains accessible to the more casual reader as well. The authors’ enthusiasm for their subject is evident throughout; they have a thorough and current grasp of the interesting problems of the field. They explain not only how various protocols work, but also why they work the way they do, and even why certain protocols are the important and interesting ones. The book is also filled with little touches of historical background, from the main text to the “Where Are They Now” sidebars to the papers described in each chapter’s “Further Reading” section―these give the reader a perspective on how things came to be the way they are. All in all, this book provides a lucid and literate introduction to networking.” —Peter Dordal, Loyola University Chicago

“I have used Computer Networks: A Systems Approach for over five years in an introductory course on communications networks aimed at upper-level undergraduates and first-year Masters students.  I have gone through several editions and over the years the book has kept what from the beginning had been its main strength, namely, that it not only describes the ‘how,’ but also the ‘why’ and equally important, the ‘why not’ of things.  It is a book that builds engineering intuition, and in this day and age of fast-paced technology changes, this is critical to develop a student’s ability to make informed decisions on how to design or select the next generation systems.” —Roch Guerin, University of Pennsylvania

“This book is an outstanding introduction to computer networks that is clear, comprehensive, and chock-full of examples.  Peterson and Davie have a gift for boiling networking down to simple and manageable concepts without compromising technical rigor.  “Computer Networks” strikes an excellent balance between the principles underlying network architecture design and the applications built on top.  It should prove invaluable to students and teachers of advanced undergraduate and graduate networking courses.” —Arvind Krishnamurthy, University of Washington

“Computer Networks: A Systems Approach has always been one of the best resources available to gain an in-depth understanding of computer networks. The latest edition covers recent developments in the field. Starting with an overview in Chapter 1, the authors systematically explain the basic building blocks of networks. Both hardware and software concepts are presented. The material is capped with a final chapter on applications, which brings all the concepts together. Optional advanced topics are placed in a separate chapter. The textbook also contains a set of exercises of varying difficulty at the end of each chapter which ensure that the students have mastered the material presented.” —Karkal Prabhu, Drexel University

“Peterson and Davie provide a detailed yet clear description of the Internet protocols at all layers. Students will find many study aids that will help them gain a full understanding of the technology that is transforming our society. The book gets better with each edition.” —Jean Walrand, University of California at Berkeley

“Morgan Kaufmann published the 5th edition of “Computer Networks: A Systems Approach” a few weeks back. If you were a student of computer networking given the task of learning the most important information but allowed only one book to read, this is the one I’d recommend. With more than 900 pages, this book covers all of the essential technologies of networking and now features appropriately expanded coverage of the most current technologies including wireless, security and P2P.” —About.com

“Computer Networks covers its subject in very fine and analytical detail and a conceptual framework like that of the ISO model maps only approximately to the realities of network systems. All the same, by using the ISO model as a rough template, Peterson and Davie are able to put across this complex subject in a way that readers can easily grasp. The ‘systems approach’ also emphasizes how each component fits into and works with the larger networking infrastructure…. As such, the fifth edition looks set to win its place on the bookshelf – or more likely open on the desk – of anyone who needs to learn the intricacies of modern networks or requires a comprehensive reference work. It doesn’t hurt that the text is very readable. Newcomers to networking technology will need to look elsewhere for a gentle introduction, but anyone with a good grasp of the key concepts will find this book an easy path to understanding the greater complexities. The book also provides readers with access to free, downloadable network simulation software and a lab experiments manual.” –Network Security

“Intended for upper division undergraduate or graduate courses in computer science, the fifth edition of this comprehensive textbook on networking is revised and updated to include the latest developments in wireless networking, mobile broadband and the latest Internet applications and services. The volume begins with a review of networking fundamentals and proceeds to cover topics such as advanced internetworking, end-to-end protocols, congestion control and resource allocation, network security, and application integration. Chapters include illustrations, tables and exercises and access to additional online resources is provided.” —Reference and Research Book News

“First published in 1996, this classic textbook has undergone major revisions over the years to keep abreast of current technological developments. The book aims to provide the reader with a foundation in computer networks and to act as a textbook for a university level networks course. It boasts two highly respected and knowledgeable authors, one of whom is professor of science at Princeton University. As such it concentrates heavily on theory, covering general principles and concepts as much as practical issues such as resilience, scalability and reliability…The thoroughness of the book cannot be faulted and the readable, accessible style is further enhanced by useful diagrams and boxed summaries throughout the text, along with exercises to check the reader’s understanding. Anyone hoping for a crash course in the subject or to learn over a few weekends should be warned that the book is 800 pages long with several pages of exercises at the end of each chapter. As such working through the volume from end-to-end is likely to be a serious undertaking. A computer network professional who is looking for a useful desktop resource may wish to look at some of the cheaper options, such as the excellent O’Reilly books, which cover the practical aspects more thoroughly at the expense of the theory. In fairness, however, the book is not aimed at this audience and serves the beginner, student or trainer very well, providing a comprehensive course and excellent source of reference.” —review on BCS.org

“The book has undergone many revisions in order to keep up with the latest developments in networking…each successive edition of the book is better than the previous edition.” —Computing Reviews, October 2012

From the Back Cover

This best-selling and classic book teaches you the key principles of computer networks with examples drawn from the real world of network and protocol design. Using the Internet as the primary example, the authors explain various protocols and networking technologies. Their systems-oriented approach encourages you to think about how individual network components fit into a larger, complex system of interactions. Whatever your perspective, whether it be that of an application developer, network administrator, or a designer of network equipment or protocols, you will come away with a “big picture” understanding of how modern networks and their applications are built.

|This best-selling and classic book teaches you the key principles of computer networks with examples drawn from the real world of network and protocol design. Using the Internet as the primary example, the authors explain various protocols and networking technologies. Their systems-oriented approach encourages you to think about how individual network components fit into a larger, complex system of interactions. Whatever your perspective, whether it be that of an application developer, network administrator, or a designer of network equipment or protocols, you will come away with a “big picture” understanding of how modern networks and their applications are built.

Larry Peterson is the Robert E. Kahn Professor of Computer Science, Emeritus at Princeton University, where he served as Chair from
2003-2009. His research focuses on the design, implementation, and operation of Internet-scale distributed systems, including the widely used PlanetLab and MeasurementLab platforms. He currently serves as the CTO of the Open Networking Foundation (ONF), where he works on open source software at the intersection of access networks and the edge cloud. Professor Peterson is a member of the National Academy of Engineering, a Fellow of the ACM and the IEEE, the 2010 recipient of the IEEE Kobayashi Computer and Communication Award, and the 2013 recipient of the ACM SIGCOMM Award. He received his Ph.D. degree from Purdue University in 1985.

Bruce Davie is VP and CTO for VMware, APJ. He joined VMware as part of the Nicira acquisition, and was Networking CTO until 2017. He has over 30 years of industry experience, and was a Cisco Fellow prior to joining Nicira. He has contributed to many networking standards and authored several networking textbooks. Bruce received his Ph. D. in computer science from the University of Edinburgh in 1988 and is an ACM Fellow.

Be the first to review “Computer Networks: A Systems Approach (The Morgan Kaufmann Series in Networking) 5th Edition” Cancel reply 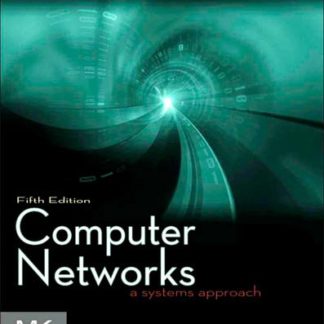