A Socialist Defector: From Harvard to Karl-Marx-Allee by Victor Grossman

The rise and successes, the travails, and the eventual demise of the German Democratic Republic told in personal detail by activist and writer Victor Grossman

The circumstances that impelled Victor Grossman, a U.S. Army draftee stationed in Europe, to flee a military prison sentence were the icy pressures of the McCarthy Era. Grossman – a.k.a. Steve Wechsler, a committed leftist since his years at Harvard and, briefly, as a factory worker – left his barracks in Bavaria one August day in 1952, and, in a panic, swam across the Danube River from the Austrian U.S. Zone to the Soviet Zone. Fate – i.e., the Soviets – landed him in East Germany, officially the German Democratic Republic. There he remained, observer and participant, husband and father, as he watched the rise and successes, the travails, and the eventual demise of the GDR socialist experiment. A Socialist Defector is the story, told in rare, personal detail, of an activist and writer who grew up in the U.S. free-market economy; spent thirty-eight years in the GDR’s nationally owned, centrally administered economy; and continues to survive, given whatever the market can bear in today’s united Germany.

Having been a freelance journalist and traveling lecturer – and the only person in the world to hold diplomas from both Harvard and the Karl Marx University – Grossman is able to offer insightful, often ironic, reflections and reminiscences, comparing the good and bad sides of life in all three of the societies he has known. His account focuses especially on the socialism he saw and lived – the GDR’s goals and achievements, its repressive measures and stupidities – which, he argues, offers lessons now in our search for solutions to the grave problems facing our world. This is a fascinating and unique historical narrative; political analysis told with jokes, personal anecdotes, and without bombast.

Victor Grossman, born Stephen Wechsler, a New York red-diaper baby of the 1930s, joined the Communist Party as a Harvard student. Fleeing the U.S. Army during the McCarthy Era, he swam the Danube River to the Soviet Zone of Austria and was sent to East Germany. There, he studied journalism and became a freelance writer and popular speaker. He was pardoned by the U.S. Army in 1994 and, in 2003, published an autobiography, Crossing the River: A Memoir of the American Left, the Cold War, and Life in East Germany.

Be the first to review “A Socialist Defector: From Harvard to Karl-Marx-Allee by Victor Grossman” Cancel reply 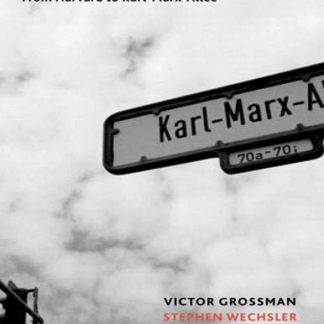 You're viewing: A Socialist Defector: From Harvard to Karl-Marx-Allee by Victor Grossman $18.50
Add to cart