This is an invaluable textbook for any introductory survey course on the science and policy of climate change, for both non-science majors and introductory science students. The second edition has been thoroughly updated to reflect the most recent science from the latest Intergovernmental Panel on Climate Change reports, and many illustrations include new data. The new edition also reflects advances in the political debate over climate change. Unique amongst textbooks on climate change, it combines an introduction to the science with an introduction to economic and policy issues, and is tightly focused on anthropogenic climate change. It contains the necessary quantitative depth for students to properly understand the science of climate change. It supports students in using algebra to understand simple equations and to solve end-of-chapter problems. Supplementary online resources include a complete set of PowerPoint figures for instructors, solutions to exercises, videos of the author’s lectures, and additional computer exercises.

Andrew E. Dessler is a Professor in the Department of Atmospheric Sciences at Texas A&M University. He received his Ph.D. in Chemistry from Harvard University in 1994. He did postdoctoral work at NASA’s Goddard Space Flight Center (1994-1996) and then spent nine years on the faculty of the University of Maryland (1996-2005). In 2000, he worked as a Senior Policy Analyst in the White House Office of Science and Technology Policy, where he collaborated with Ted Parson. Dessler’s academic publications include three books: The Chemistry and Physics of Stratospheric Ozone (Academic Press, 2000), The Science and Politics of Global Climate Change: A Guide to the Debate (with Ted Parson, Cambridge University Press, 2006, 2010) and Introduction to Modern Climate Change (Cambridge University Press, 2012). He has also published extensively in the scientific literature on stratospheric ozone depletion and the physics of climate. –This text refers to an out of print or unavailable edition of this title.

This textbook introduces students to the entire problem of modern climate change – science, economics, and policy – enabling them to engage in informed debate of public policy. The focus is on anthropogenic climate change. The combination of science with economics and policy makes this a unique introduction among climate change textbooks. –This text refers to an out of print or unavailable edition of this title.

The thoroughly updated second edition of an invaluable textbook for any introductory survey course on the science and policy of climate change. –This text refers to the paperback edition.

“At last, a textbook about the scientific basis for global climate change that’s well balanced, well written, highly illuminating, and accessible to non-science majors.”
Professor John M. Wallace, University of Washington”Several years ago, Professor Andrew Dessler created an introductory course on climate change at Texas A&M University for freshman and sophomores. This textbook is an outgrowth of the notes he used in teaching that course. Last year while Andy was away I taught the course using his first draft of the book, which was shared online with the students. Both the students and I very much enjoyed the course and the notes. Andy is a natural teacher and writer with such an ease of presentation that he makes complex subjects accessible by his clever use of everyday analogies. Climate change is a subject that Andy cares about passionately, and he really cares about his reader as well. The book provides an expert’s exposition of climate change in all its facets, from ice sheets to options for public policy. While it is written primarily as a textbook, it also provides excellent reading for any layperson interested in the subject.”
Professor Gerald R. North, Texas A&M University”Professor Dessler’s book is written for ‘undergraduate non-science majors’. He must believe in the impossible – that he can bring a topic as complex as climate change into focus for students with little background in science. However, I must say that Professor Dessler has succeeded! Students who read this book will achieve a level of understanding of climate change that they may, first, “engage in an informed debate of public policy”; second, understand the deep significance of Climategate; and third, explain and act upon the recent explosion of public interest in climate change (wide coverage by the media, and huge UN conferences, with more than 20,000 persons attending). To put this in perspective, Lord King, a former scientific advisor to the British Prime Minister, is quoted as saying that ‘No single issue, scientific or non-scientific, has ever received as much attention from world leaders as climate change.’ Why this upwelling of interest? And how can society profit from it?”
Professor Ted Munn, University of Toronto”The book reads extremely well: It uses stories, analogues, and examples to draw the reader into the story of the science of our changing planet. Despite the complexity of the actual science, Dessler presents the material in a clear manner and does it without drawing on mathematics any more difficult than simple algebra. ..However, Introduction to Modern Climate Change does a better job than either of those books at getting to the heart of the science and at analyzing the philosophies leading to possible policy options. I recommend this book for anyone interested in learning more about climate change and the challenges it presents to humanity.”
Donald J. Wuebbles, Physics Today, November 2012″ The text provides a readable, concise summary of the science of climate change, but it is the nonscientific aspects of the book that set it apart…Overall, I think this is a well-crafted textbook. The writing is very accessible without being too simplistic. The combination of a broad overview of the science and policy of climate change is both novel and appropriate for the intended audience: an introductory-level survey course on climate change. Reading the book was a learning experience for me, and I would happily recommend this book to anyone seeking an introduction to climate change.”
Guillaume Mauger, Bulletin of the American Meteorological Society –This text refers to an out of print or unavailable edition of this title. 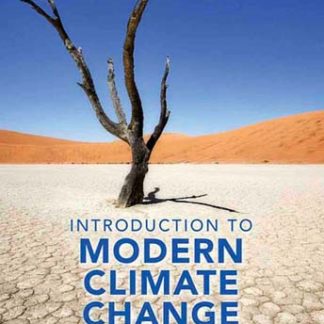